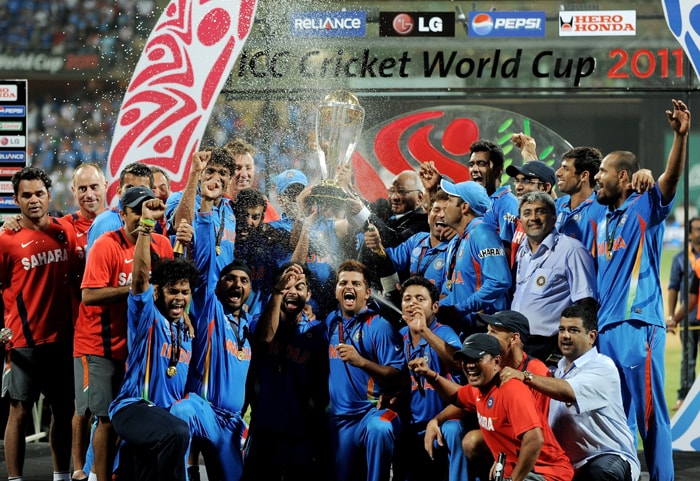 Team India waited for 28 long years to get it's hand on the coveted 'Cup of Joy' but it was the Master Blaster's wait of 20 years that drove Dhoni's men to give in their best and win the Cricket World Cup 2011 Championship.

The feeling was beyond ecstasy for the Men in Blue as they held the trophy - Fierce tigers of the team, Yuvraj and Bhajji bursting into tears, Sachin being carried on Virat Kohli and Suresh Raina's shoulders - these are moments that would go down as the most priceless ones in the history of our nation.

Take a look as the Captain Cool's confident boys got their hands on 'Their Precious!'(AFP Photo) 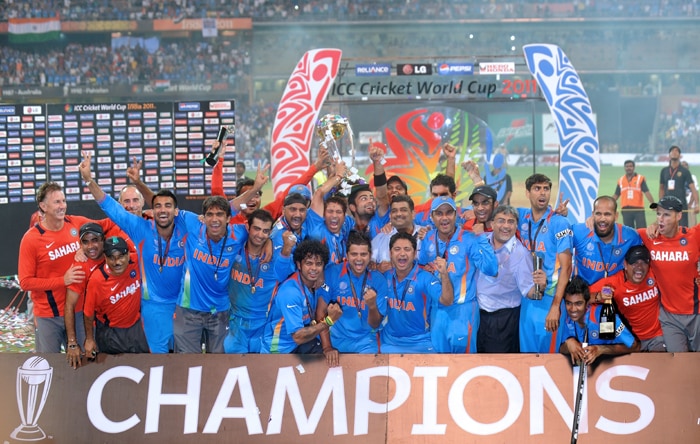 Their joy beyond measure. Captain Dhoni is a proud man who has stood firm on his decisions, decisions that steered team India to a memorable victory. (AFP Photo) 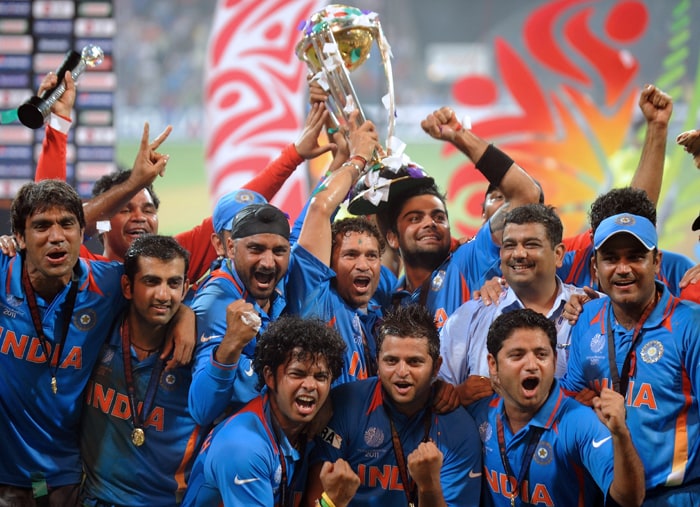 The World Cup win is for Sachin Tendulkar, an emotional Gautam Gambhir said after the historic victory in World Cup finals against Sri Lanka. (AFP Photo) 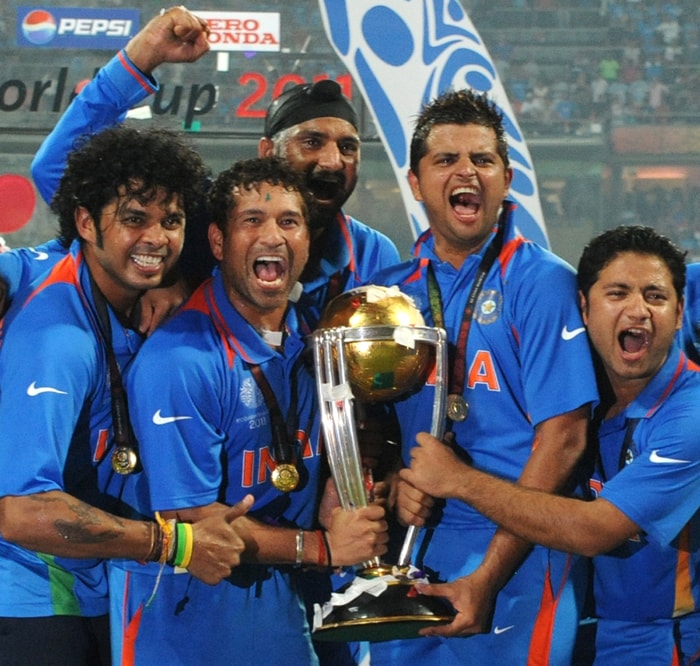 The young force in the team has been a great anchor and have played one of the most pivotal roles in clinching the victory. (AFP Photo) 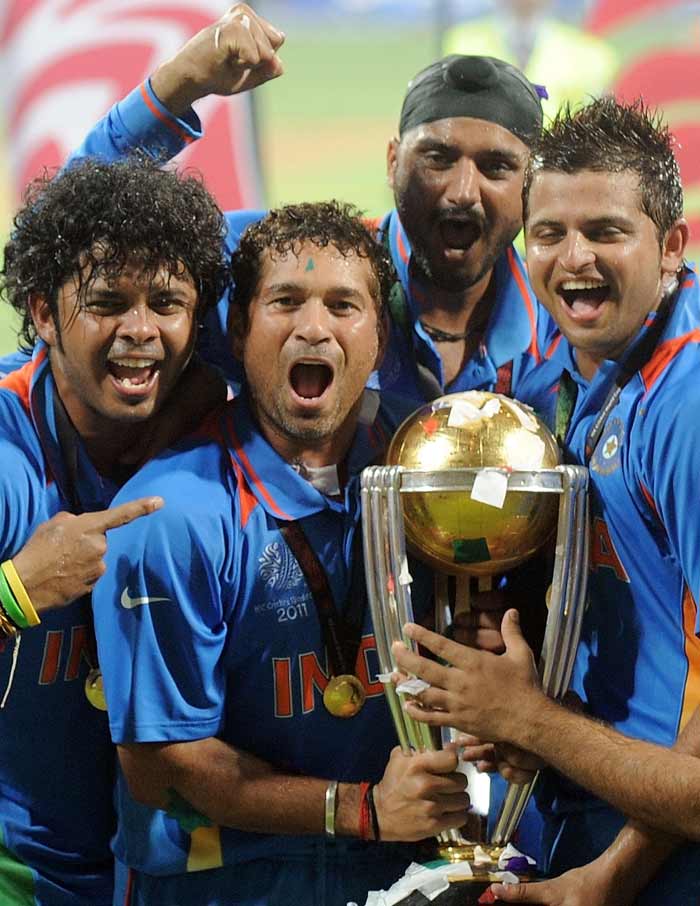 All for this one man! The Master Blaster said it was the proudest moment of his life! He gets his hands on the trophy after six World Cup tournaments and 20 years of wait!

The team has dedicated the trophy to him, he who truly deserves it and yes, the tears of joy that rolled down his cheeks said it all to us! (AFP Photo) 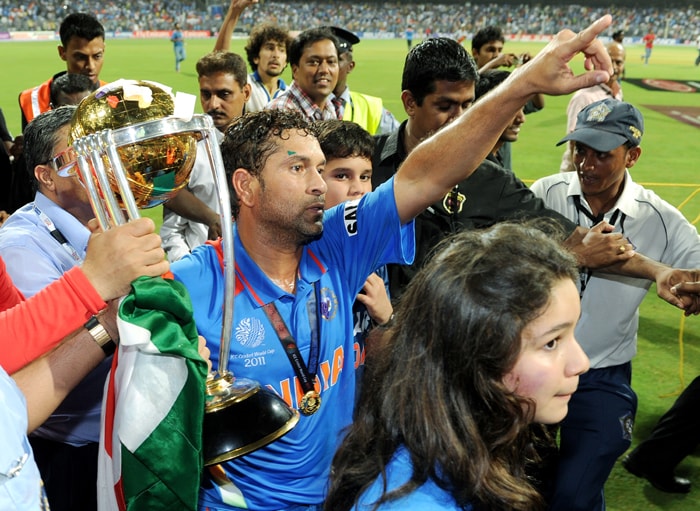 The man of the moment. Sachin expresses his gratitude to his home-crowd.

It wasn't just the 32,00 odd people present at the Wankhade stadium who prayed for Team India to win the cup for Sachin but millions of his fans across the globe pitched in in their own unique manner. 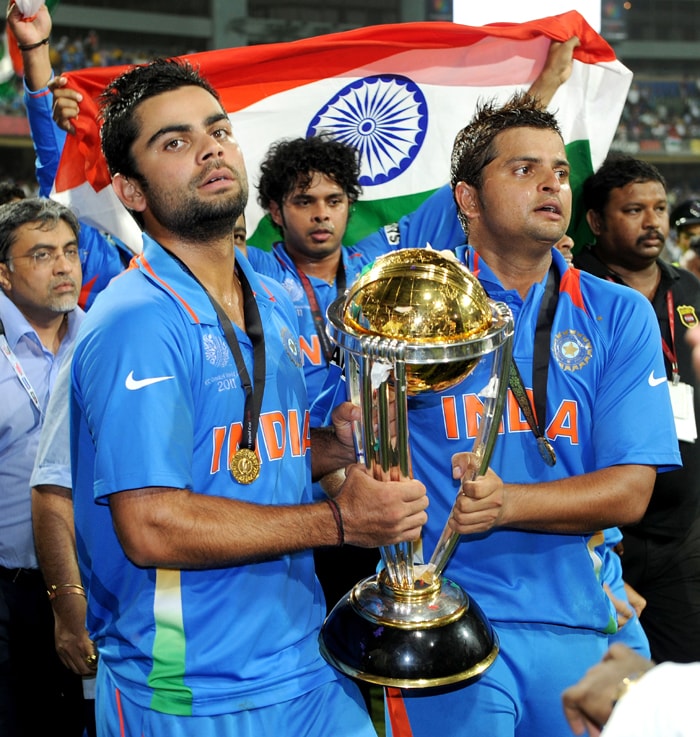 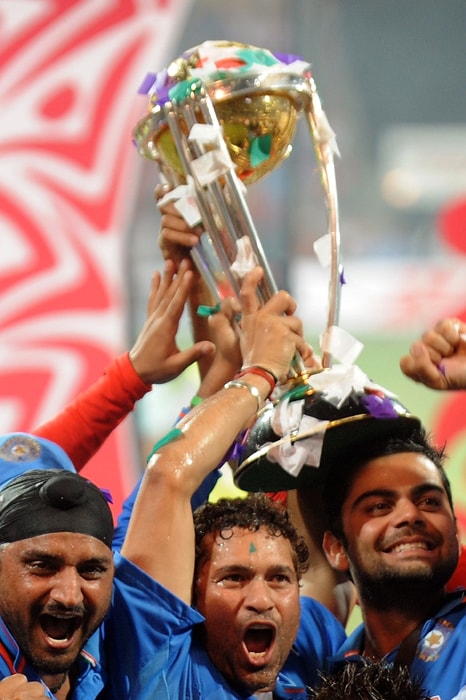 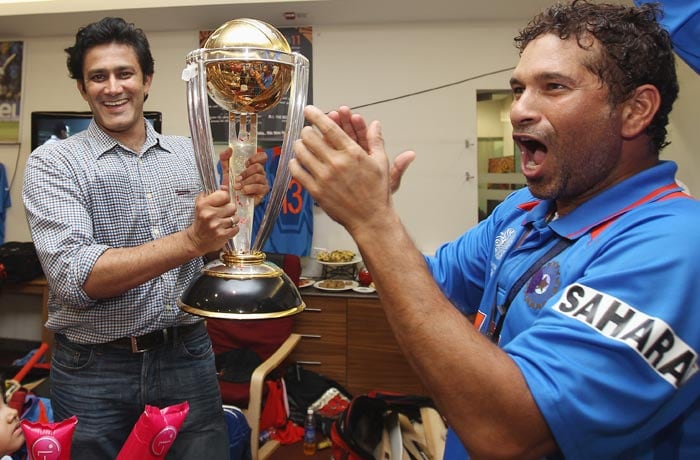 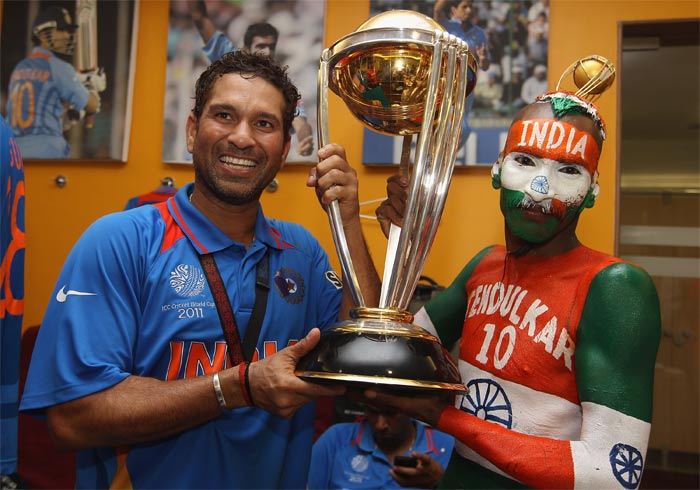 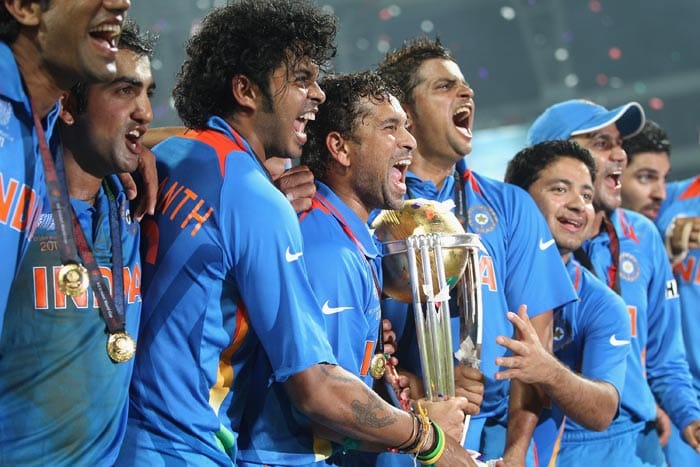 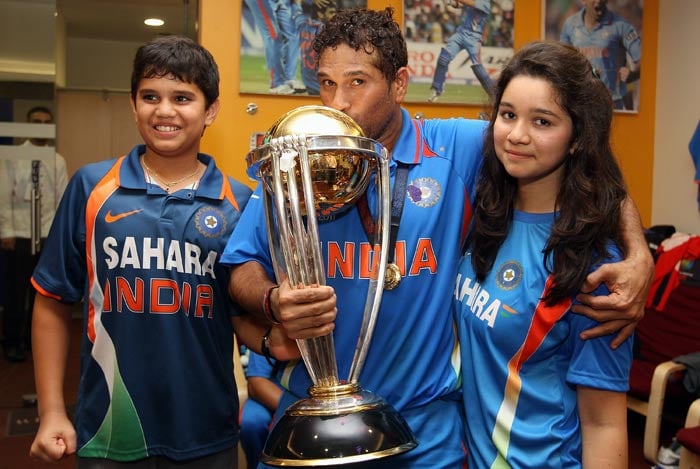 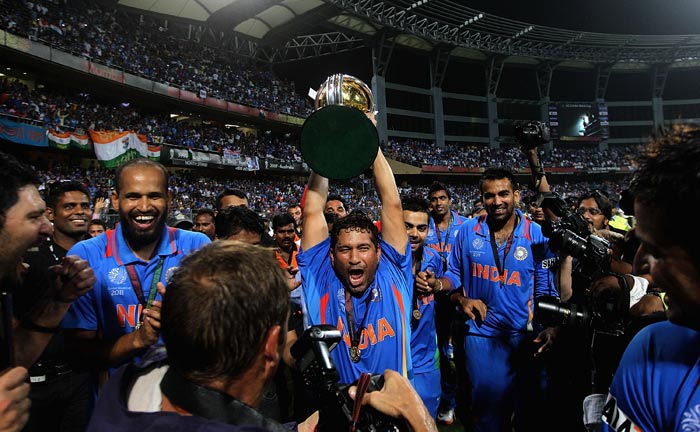 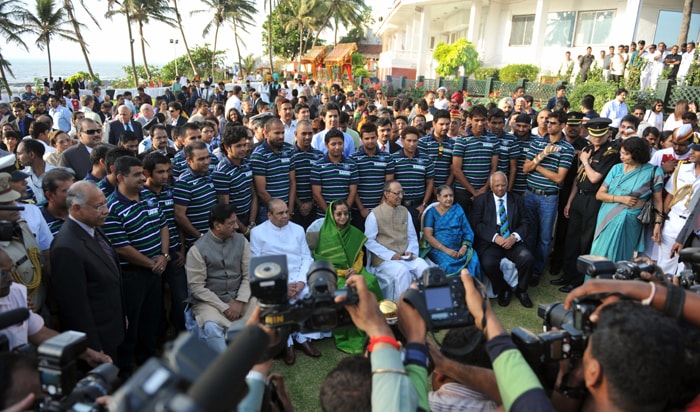 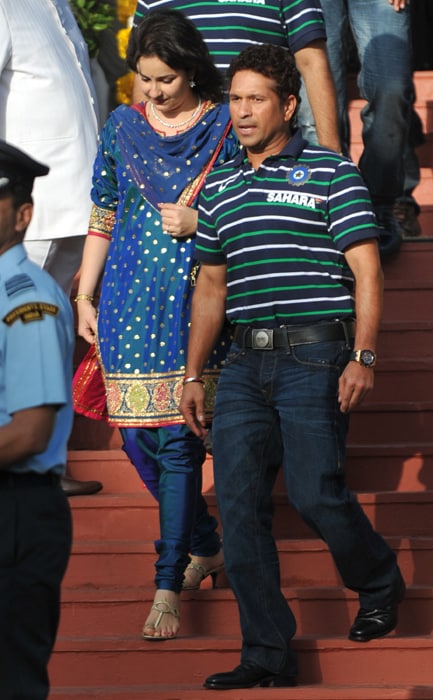 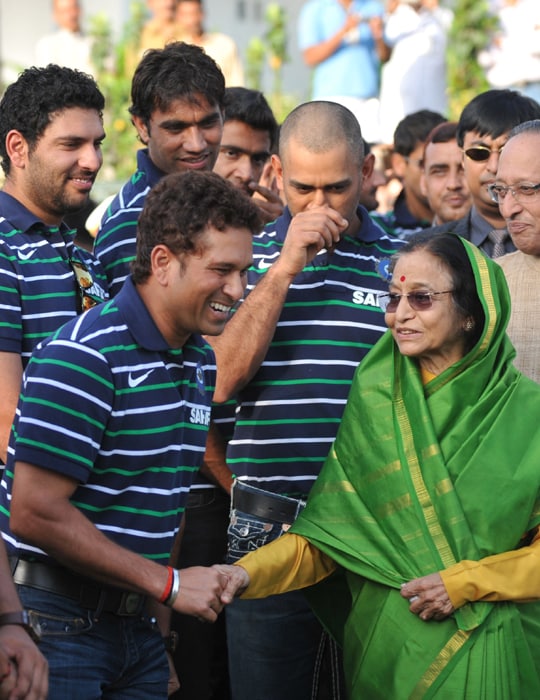 But the BCCI has not forgotten the men who picked these boys. The Indian selectors may have missed the Mohali match, but they will not complain as they have been granted a reward themselves, richer by Rs.25 lakhs each.

And even Gary Kirsten, the Indian coach, and his support staff will receive parting gifts of Rs.50 lakhs each for their part in making the Indian dressing room conducive for such superlative success.

Expect more perks coming the way of the Indian cricketers after his ascent. The Hyundai Verna awaits them for starters.
Email ThisBlogThis!Share to TwitterShare to FacebookShare to Pinterest
Posted by Jagan at 7:48 AM Labels: India CUP of JOY Photo collection, Latest Photos and Album, Men in Blue Photos - Indian Cricekt Team Celebration and Rewards Photos, World Cup Cricket 2011