Why you need to apply for a new cheque book

Considered to be a major milestone in the history of Indian banking, Cheque Truncation System (CTS) aims to make cheque clearance more efficient and reduce the clearance time of cheques to one day, thereby trimming down the floating time considerably. India processes as many as 1.2 billions cheques annually and therefore, the implementation of this system would drastically cut down the waiting period involved. The system will be implemented nationwide from April 1, 2013. 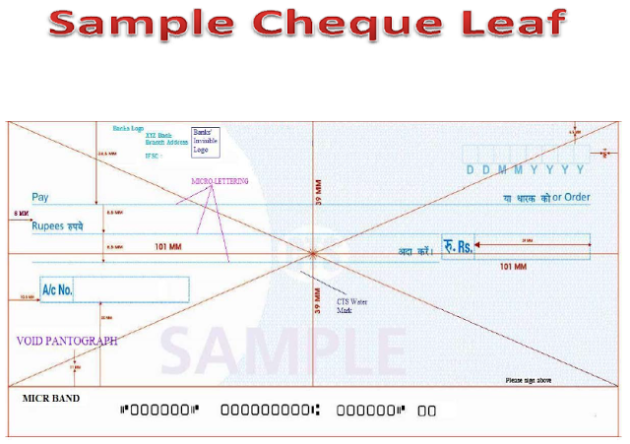 How does it work?

An online image-based cheque clearing system, the collecting bank branch would deploy scanned images along with the magnetic ink character (MICR) of the cheque which will be sent out electronically using their Capture System, removing the need for physical/manual transfer of cheques. The captured images and the data is then signed and encrypted and sent to the Clearing House or the central processing location and thereafter forwarded to the drawee or paying bank.

Impact of CTS on Customers

Handling of EMIs with the Introduction of CTS

In cases where customers have issues post-dated cheques (PDC) for payment of monthly installments towards an ongoing loan, they would need to issue fresh cheques to the bank or service provider as per the new directive on CTS by the RBI. The replacement of these cheques needs to be done latest by April 1, 2013 and is applicable on all banks and NBFCs.

Customers may need to surrender their old cheque books or cancel them and show proof of cancellation. No replacement fee will be charged by the bank for issuing new cheque books

Apart from these aspects, the system does not, in any way, affect the way things function for a customer. They would continue using cheques as they do currently; however, cheques that have been altered or modified will not be permissible under the new system. The other precautions that need to be taken while issuing or writing a cheque are:

Benefits of CTS for Customers

There are many benefits of the cheque truncation system from the perspective of a customer.

Email ThisBlogThis!Share to TwitterShare to FacebookShare to Pinterest
Posted by Jagan at 7:43 AM No comments:

Sweeeeet! Southwest Airlines is celebrating $1,000,000 in profit so far in 2012 by giving away FREE tickets to Facebook users! Get in quick though, they wont last long! Get yours here:

Secure your facebook accounts now... UNTAG you and your friends if you're victim of this SPAM on your timline.

Do not click on the links posted on your facebook with relevant to above image. It may steal your information.

Andrew Blum: What is the Internet, really?

Email ThisBlogThis!Share to TwitterShare to FacebookShare to Pinterest
Posted by Jagan at 6:52 AM No comments:

Watch what you say on social media, say lawyers

To avoid hassles while using the social media network, lawyers say social media users should exercise 'some level of care and caution'.

High court lawyer Jamshed Mistry said, "On a larger social platform, one has to ensure that he/she does not put up content that is blasphemous or abusive in nature.
It is better to err on the side of caution."

He, however, added, "The principle of natural justice demands that a person who has put up a comment on a networking site be allowed to give an explanation for it. You cannot immediately book and arrest a person after a complaint, as it would be short-circuiting the procedure of law."
He said, "If the issue is not handled with care, maybe the time will come when one would need to put up a disclaimer with every post on a networking site."
Lawyer Arfan Sait said, "While Article 19 of the Constitution gives you freedom of speech, it is not absolute and has some limitations."
He said, "While putting up something on a networking site, one needs to have basic civic sense and social sensitivity. Also, youngsters should be given basic training about the Information Technology Act that will help them know what content can land them in trouble."
IPS officer turned lawyer YP Singh said that while on most occasions there is 'abusive discretion' - where a complaint is filed for some ulterior motive - something that cannot be stopped, when it comes to objective discretion, one has to tread carefully while putting up something about a religious community or caste.
"There are issues such as religion, caste or even jokes of a sexual nature that need to be handled carefully. One should refrain from using abusive or filthy words on social forums. Also, care should be taken to not share unfounded information or sexually explicit content," Singh added.

Published by HT Syndication with permission from Hindustan Times.