The tablet has dual screens along with a customised interface

As reported by The Mobile Indian earlier, Sony has launched its second and the most anticipated Sony Tablet P in India. Sony was earlier expected to bring the device mid January itself. The Sony tablet P is now available from Sony retail stores along with all major electronics outlets across the nation. The tablet is also available through a number of online retail store including Flipkart and Ebay India. The Sony P tablet has a folding tablet design similar to that of a clamshell based phone, but is a bit bigger. The clamshell design has been added to make the device portable and much easier to carry than tablets based on conventional design. A much detailed first hand experience of the device can be found here.

Email ThisBlogThis!Share to TwitterShare to FacebookShare to Pinterest
Posted by Jagan at 10:00 PM No comments:

BSNL has launched three tablets including two 7 inch resistive screen based tabs with Android 2.3 operating system while the third tablet comes with an 8 inch capacitive touchscreen.

The cheapest model is Panta Tpad IS 701r which is priced at Rs 3,250. Notably, Aakash is priced at just Rs 2500. However, Tpad has better specification than the Datawind's low cost tablet.

Panta Tpad is a WiFi only tablet with Android 2.3 operating system, it has a 1 GHz processor (ARM11 IMAP210) clubbed with 256 MB RAM. The tablet also offers HDMI port through which it can be connected to a TV. Its 7 inch resistive touch screen comes with 800x600 resolution and 16:9 aspect ratio.
pagination.

The tablet has a 3000 mAh battery and 2 GB internal memory which can be expanded through micro SD card. The tablet also has a VGA front facing camera for video calling. While Panta Tpad IS 701r has the BSNL branding, the other two tablets images do not have. 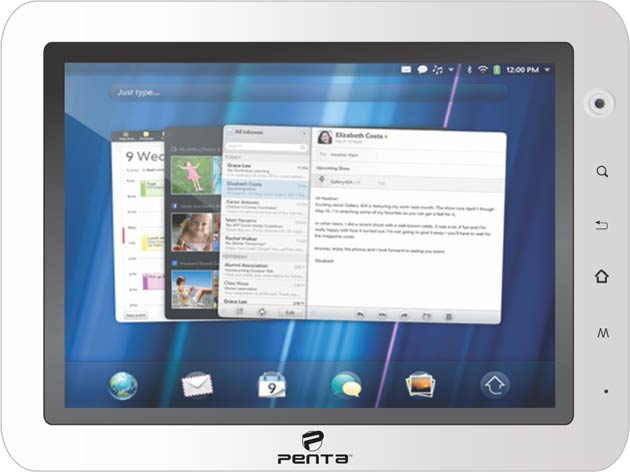 The second tablet is named 'Panta Tpad_ws704c'. It has the same specification as its cheapest cousin (701r) but offers added 3G connectivity which supports both CDMA/EVDO and GSM, inbuilt A-GPS, Accelerometer and Bluetooth. It also comes with a 2 megapixel rear camera and also has bigger 512 MB RAM for faster performance.

The costliest amongst the three is the Tpad WS802C which has an 8 inch capacitive screen. It comes with a faster 1.2 GHz processor and 512 MB RAM. The internal memory is also bigger at 4 GB. Rest of the features like GPS, camera and Bluetooth are same as the 704C.
Source: The Mobile Indian
Email ThisBlogThis!Share to TwitterShare to FacebookShare to Pinterest
Posted by Jagan at 7:59 PM No comments:

Has the battery run out on Aakash tablet?

Aakash, the "$35" computer launched last year in India as the world's cheapest tablet, has run into problems and companies will be invited to bid again to make the device after complaints of poor performance and hiccups rolling out a pilot model.

The government has hailed the Aakash tablet as an achievement of Indian frugal engineering that would end the digital divide in a country where only one in every 10 of its 1.2 billion people use the Internet.

Products such as Apple Inc's iPad are beyond the reach even of many in the fast-growing middle class. The locally assembled machine has a cost price of around $50 and was to be sold to students by the government for $35.

But only 10,000 units have been shipped since October. The relationship between the device's manufacturer, DataWind, and a government research institute soured amid complaints by test users that the processor was too slow, the battery life short and the resistive touch screen hard to use.

The government's Human Resource Development Ministry is due to launch a new tender in the next few weeks to seek partners to build the tablet - a process that could see DataWind dropped.

"It is not automatic that because you have done phase one you will do phase two," said a senior official at the ministry with direct knowledge of the project.

Datawind won a contract last year to make 100,000 units for the government and it was thought likely it would make the additional 1 million units called for in the second phase of production. But it had lost its first-mover advantage and would face renewed competition for the contract, the official said.

"The feeling is that sufficient interest has been generated to get better specifications at the same or a lower price," added the official, who declined to be named.

A small London-based company, DataWind developed the tablet with the Indian Institute of Technology. The company said the institute had changed the specifications late last year and now wanted a device that could meet U.S. military durability requirement for the same rock-bottom price.

"Among other things that requires the device to take 4 inches an hour of sustained rain," DataWind CEO Suneet Singh told Reuters.

"We objected to it and the project has been on hold since then, we are working with the ministry to get that resolved," Singh said after meeting with ministry officials in New Delhi on Tuesday.

India has a reputation for creating affordable products that are easy to use and sturdy enough to handle its rugged environment -- from Tata Motors' $2,000 Nano car to generic versions of pharmaceuticals.

But despite being a leader in software and IT services, India trails fellow BRIC nations Brazil, Russia and China in the drive to get the masses connected to the Internet and mobile phones, a report by risk analysis firm Maplecroft said last year.

The number of Internet users grew 15-fold between 2000 and 2010 in India, according to another report. Still, just 8 percent of Indians have access. That compares with nearly 40 percent in China.

The Aakash is aimed at university students for digital learning via a government platform that distributes electronic books and courses.

DataWind says it is receiving tens of thousands of orders daily for a commercial version of the tablet with a built-in GPRS modem that is due to be launched this month for 2,999 rupees.

Email ThisBlogThis!Share to TwitterShare to FacebookShare to Pinterest
Posted by Jagan at 4:30 PM No comments:

Email ThisBlogThis!Share to TwitterShare to FacebookShare to Pinterest
Posted by Jagan at 4:23 PM No comments:

Facebook, the social network giant, is set to begin showing advertisements to users on mobile devices before its $5 billion initial public offering, the Financial Times reported on Monday.

Facebook has already discussed proposals with unidentified advertising agencies for displaying what it calls "featured stories" in the news feed seen by users on the site in an effort to tap a new source of revenue, the newspaper cited several people familiar with the plans as saying.

Facebook mobile device users are likely to see advertisements in March ahead of its initial public offering, which is expected in May, according to the FT.

Email ThisBlogThis!Share to TwitterShare to FacebookShare to Pinterest
Posted by Jagan at 4:05 PM No comments:

2G auction should be among 2008 licencees: Uninor

Telecom firm Uninor, that lost all its 22 licences following the Supreme Court's verdict last week, Monday proposed that only those players who got licences in 2008 should be invited for auction.

The firm said it would decide to bid after reviewing various criteria, including the reserve price for spectrum. It also said the Norwegian government will speak to Indian officials on Uninor losing its licences.

"The auction needs to be among the new players involving parties who were in 2008," Sigve Brekke, managing director of Uninor and member of the Telenor Group executive management as head of the Telenor Asia operations, told reporters here.

"Last time it was very clear that the policy of the government was to increase competition, so the (then) incumbents were not invited. This time it needs to be in the same spirit, the incumbents should not be invited," he added.

On bidding for the spectrum, Brekke said: "That is way too early to say. First we need to see what their bidding criteria would be, what their reserve price would be. Intention is definitely to continue. In principle, we are definitely looking to bid in the auction."

Brekke said the company would fight for securing its investments and customers.

"We are trying to work on all the different tools we have, of course also working on legal options. It's possible to sit down and talk and we have started talks with both the government and the regulator," he added.

Brekke said the Norwegian prime minister has also written to his Indian counterpart. The information technology minister of Norway, who is in India for a week, will be meeting the government as well.

Brekke said the company's operations were in full swing but he was upset with rumours about closure of its services, allegedly circulated by competitors.

"The signs from competitors are unethical," Brekke said, adding that they will soon come out with new advertisements.

On the Telecom Regulatory Authority of India's (TRAI) pre-consultation paper on 2G auction, Brekke said the company would submit its views by the end of this week.

Uninor, a joint venture between Norway's Telenor and India's Unitech, currently has close to 40 million customers in India.