A channel is a curated list of video clips chosen by a specific YouTube member or celebrity.

Channels are now displayed in a central column on the site's home page resembling news feeds on social networks such as Facebook or Google+.

Experts say the redesign may mean people spend longer on the site, but some users have attacked the change.

Around 17 hours after an official "Get More Into YouTube" clip explaining the move went live, 6,703 members had clicked the "dislike" button compared to 2,280 who had clicked "like".

"The layout is a mess! Why can't I remove vids which I've already watched?" wrote one member.

Others wrote "R.I.P. Youtube" and "Change it back", although some complimented the change.

The site's owner, Google, has posted a blog saying that the new design was "focused on helping you discover a broader range of entertainment", but said there might be "further tweaks" depending on members' feedback.

It highlighted the fact that the site now offered deeper integration with Google+ and Facebook, helping members see what their friends were sharing without leaving YouTube's site.

Channels from broadcasters, including the BBC and Channel 4, are also promoted.

Google is also in the process of launching around 100 channels curated by celebrities and other well-known content providers. The firm is investing tens of millions of dollars into the project.

Reports suggest the singers Madonna and Jay-Z, the actor Ashton Kutcher, the creator of the CSI TV shows Antony Zuiker, and the skateboard legend Tony Hawk will be among those providing content. 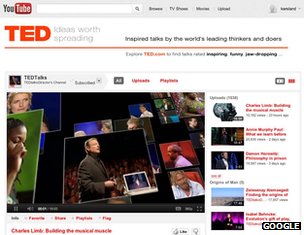 The majority of the new channels are expected to launch next year.

"This does the obvious thing of keeping people longer on their site," said Theresa Wise, an independent media analyst.

"But it is also taking the behaviour we've seen of people going to sites such as Facebook and Twitter to see what videos are trending, and allows them to do it easily from within YouTube itself."

Analysts also believe the backlash will be short-lived, noting similar reactions after refreshes by other sites.

"The trouble with the kind of instant reaction is that most of the people who post their comments are those with extreme reactions, and their yearning for the old design will probably dissipate as they get used to it," said Ian Maude, internet analyst at Enders Analysis.

"But I like it - it feels fresher and more up to date and the shift to channels helps YouTube move towards professional programming to create a more TV like service.

"That makes it a more attractive environment for both content providers and advertisers.
Source: BBC Tech News

Email ThisBlogThis!Share to TwitterShare to FacebookShare to Pinterest
Posted by Jagan at 9:15 PM