Facebook has announced it is hiring the co-founders of Gowalla.

The social network is also taking on other developers from the location-based "check-in service". Gowalla will close in 2012 as a consequence.

The news comes days after Facebook announced plans to take on "thousands" of new members of staff.

The company is opening a software engineering centre in New York as part of the strategy - its first away from of the West Coast of the US.


Despite a report last week by CNN that Facebook had acquired Gowalla for an undisclosed sum, the company said on Monday that it had taken on key members of the businesses's staff but had not bought the organisation outright.

"We're excited to confirm that Gowalla co-founders Josh Williams and Scott Raymond, along with other members of the Gowalla team, are moving to Facebook in January to join our design and engineering teams," a statement said.

"While Facebook isn't acquiring the Gowalla service or technology, we're sure that the inspiration behind Gowalla will make its way into Facebook over time."

Texas-based Gowalla is a two-year-old social network based around the idea of allowing users to "check in" to locations and share pictures from their visits.

Members used to receive virtual "items" at certain check-in points. However, the company struggled against a larger competitor, Foursquare.

In September it refocused its efforts on becoming a travel service, offering "social guides" to 60 cities, including London, Paris and Chicago, based on its members' postings.

A blog post on Gowalla's site said: "Gowalla, as a service, will be winding down at the end of January. We plan to provide an easy way to export your Passport data, your Stamp and Pin data (along with your legacy Item data), and your photos as well. Facebook is not acquiring Gowalla's user data.

"As we move forward, we hope some of the inspiration behind Gowalla - a fun and beautiful way to share your journey on the go - will live on at Facebook."

The original CNN report suggested that the Gowalla team would work on Facebook's Timeline feature.

Timeline turns users' profile pages into digital scrapbooks, making it easier for them to view each others' life histories.

The feature was announced in September, but has yet to be rolled out to many of the site's members.

A spokesman for the firm told the BBC: "It is coming soon."

Facebook already had a location-based service built into its mobile device apps and website, but experts say the network may want to use the developers' experience to create a richer experience.

"Facebook Places seems to work fairly well but they want to make a big play in this area," said Lee Bryant, the European managing director of Dachis Group, a social media consultancy.

"Location-based services are still in their early stages. Gowalla was interesting and slightly more story-based than Foursquare, which Facebook may feel will help it strengthen its Timeline service."

The announcement follows Friday's news that the firm plans to open a software engineering centre in New York in early 2012. 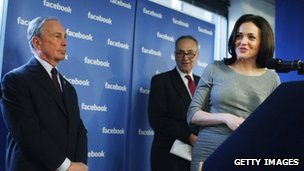 The company already employs an advertising team in the city. However, it is the first time the company has created a software base that is not on the US West Coast.

"We are trying to grow at a clip that will allow us to get the very best people and integrate them," she said.

"We will be adding thousands of employees in the next year."

The new office will be headed up by Serkan Piantino. He previously led the engineering team behind Facebook's News Feed and helped develop its Timeline feature.

Ms Sandberg did not specify how many of the promised posts would be created in New York.

The moves come ahead of an expected share flotation which analysts say may occur in the first half of next year.

The Wall Street Journal has reported that the firm could raise $10bn through the sale, valuing the company at $100bn.

It quotes sources saying that the initial public offering (IPO) could be completed by June.

Facebook has declined to comment, saying it does not want to add to speculation about the move.

Email ThisBlogThis!Share to TwitterShare to FacebookShare to Pinterest
Posted by Jagan at 9:50 PM