More than 10 billion apps have been downloaded from Google's Android Market.

To mark the moment Google said that for the next 10 days it would cut the price of some top apps to 10p each.

The search giant announced the milestone on its blog adding that the store's apps were being downloaded at a rate of one billion a month.

However, some industry analysts played down the figure saying Google should do more to address poor-quality programs.

Google said the pace at which apps were being downloaded was starting to accelerate. Its figures show Android took 22 months to reach one billion downloads but only one month to go from nine billion to 10 billion.

By contrast, Apple hit one billion downloads after nine months. Although the iPhone maker still maintains a lead, some experts believe it will be short-lived.

"Apple announced the 15 billion download mark in July so it's clear that Android's momentum in device activations is translating to application downloads and usage," said Geoff Blaber from analysts CCS Insight.

"We'd expect Android to overtake Apple in application downloads in the first half of 2012."

However, added Mr Blaber, such swift growth posed a challenge of how to help customers discover useful software from all the other code on offer.

"It's an issue for developers and consumers alike but a significant opportunity for whoever solves the problem first," he said.

Google's Android smartphone platform became the world's most popular in early 2011 when it overtook Nokia's Symbian. 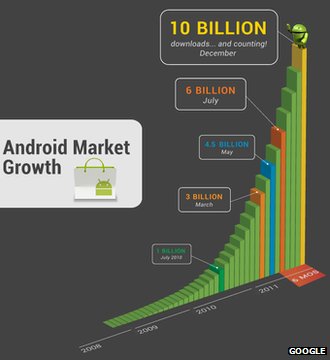 Sales are believed to have been helped by the appearance of Android tablets such as Amazon's Kindle Fire.

The celebration of the 10 billionth download will last for 10 days during which Google will pick a series of top programs and drop their prices.

Among the first titles to be discounted are Asphalt 6 HD, Minecraft, Endomondo Sports Tracker Pro and Swiftkey X.

"The number game matters to industry watchers and helps advertising but it is not changing the bottom line," she said.

"Quality of the apps and the store in general and curation in particular should be the focus for Google," she said. "This is where I still see a difference between the Apple App Store and Android Market.

"This might not impact downloads but it will eventually impact the revenue opportunity for developers," she told the BBC.

Email ThisBlogThis!Share to TwitterShare to FacebookShare to Pinterest
Posted by Jagan at 8:13 PM