A camera capable of visualising the movement of light has been unveiled by a team of scientists in the US.

The equipment captures images at a rate of roughly a trillion frames per second - or about 40 billion times faster than a UK television camera.

Direct recording of light is impossible at that speed, so the camera takes millions of repeated scans to recreate each image.

The team said the technique could be used to understand ultrafast processes.

The process has been dubbed femto-photography and has been detailed on the Massachusetts Institute of Technology's Media Lab's website.

"There's nothing in the universe that looks fast to this camera," said Andrea Velten, one of the researchers involved in the project.

To create the technique, the scientists adapted a "streak tube" - equipment used to take data readings from light pulses.

It works in a similar fashion to the way pictures are created on traditional television cathode ray tubes, scanning one thin horizontal line at a time.

Since each image is only equivalent to one scan line on the television set, many hundred scans had to be taken to create a single frame.

The scientists did this by repeating each shot, angling the camera's view with mirrors to record a different scan line of the object.

As a result, the technique is only suitable for capturing an event that can be recreated exactly the same way multiple times. 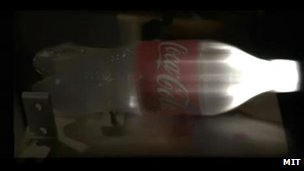 To create a moving picture, a laser pulse was used to illuminate the scene - flashing briefly once every 13 billionth of a second.

These pulses triggered the streak tube, which captured the light that returned from the scene.

The laser and the camera were carefully synchronised to ensure each pulse was identical. When the scan lines were stitched together, they appeared to have been taken at the same time.

It took about an hour to take enough shots to make a final video representing a fraction of a second of real time, leading one member of the team to dub the equipment "the world's slowest fastest camera".

Software was then used to turn all the images into movies lasting roughly 480 frames.

One showed a pulse of light, less than a millimetre long, travelling through a soft drink bottle at a rate of half a millimetre per frame.

Another showed different wavelengths of light rippling over the surface of a tomato and the table it was sitting on.

In addition to revealing new ways of seeing the world, the MIT scientists say the process could have some practical uses.

"Applications include industrial imaging to analyse faults and material properties, scientific imaging for understanding ultrafast processes and medical imaging to reconstruct sub-surface elements, ie 'ultrasound with light,'" they say on their website.

Email ThisBlogThis!Share to TwitterShare to FacebookShare to Pinterest
Posted by Jagan at 7:36 PM