Google has launched an online music store in the US, which will allow devices running its Android software to buy, store and stream MP3 files.

However, Warner Music Group has opted not to take part at this point.

The service poses a challenge to Apple's dominance of the sector. It launched its iTunes store in 2003.

However, a new study by the research firm Gartner suggests that more than half of all smartphones sold between July and September ran Android. That accounts for more than 60 million devices.

By comparison Apple's iOS handsets accounted for 15% of the market over the same period, according to the study.

Google is also integrating its new service with its Google+ social network.

Users will be able to share songs with their Circles contacts who can listen to the full length of the tracks one time without making a purchase.

Songs range in price from 69 cents (44p) to $1.29 and come without DRM copy-protection. The search giant is also offering a different track free for download every day.

The rapper Busta Rhymes - who was at the launch event - is debuting his new studio album on the Android store. The Rolling Stones and Coldplay are offering previously unreleased live performances.

Google is also hoping to link with smaller artists through its new Artist Hub. Musicians can add their own page for a $25 fee and set their own prices. Google will take a 30% share of each sale. 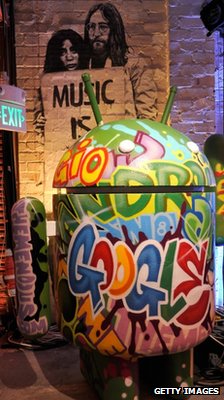 Google is adding music to its app, video and book sales on the Android Market

The firm did not discuss any plans to offer Google Music outside the US.

Google is not the only tech company trying to make a splash in the music industry.

Blackberry launched its BBM Music service in the UK on Tuesday. The firm offers users 50 DRM-protected tracks of their choice for £4.99 a month.

Members can also listen to their friends' selections. The service is also live in the US, Canada and Australia.

Nokia is pursuing a different model, offering owners of its new Lumia 800 Windows Phone use of its Mix Radio app.

The software scans the users' music collections and builds a customised radio station from the firm's 15 million strong library.

The firm launched its new Kindle Fire tablet earlier this week which may drive further sales from the site.

Streaming subscription service Spotify is also expanding after launching in the US in July. It offers apps for Android, iOS and Windows Phone.

The other big player in the US is the internet radio service, Pandora, which tries to tailor its selection to each user's taste.

Despite all the competition, analysts say Google Music still has room to manoeuvre.

"It's not exactly innovative, but the reality is that Google will get success in the same way it has in other markets - by making the most of its strengths in search and Android, and it will keep chipping away," said Colin Gillis, technology analyst at BGC Partners.

The chief executive of the UK-based 7digital MP3 store added that others may benefit from the search giant's move.

"Google's long overdue entry in the market is welcome as the company has a special market role, in helping combat piracy through the power to control search listings, Adwords advertising and dodgy MP3 apps on the Android market, and also in showing consumers there is choice beyond iTunes," said Ben Drury.

Email ThisBlogThis!Share to TwitterShare to FacebookShare to Pinterest
Posted by Jagan at 6:10 PM